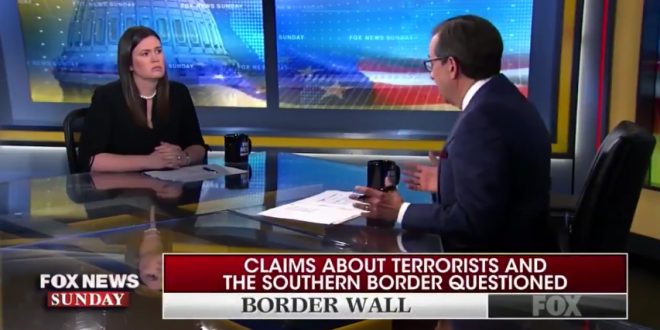 “We know that roughly– nearly 4,000 known or suspected terrorists come into our country illegally,” Sanders told Wallace in a Sunday interview, echoing a well-rehearsed administration talking point that began with Trump’s (admittedly baseless) dog whistle that “unknown Middle Easterners” were among those traveling as refugees to the southern border.

“I know the statistic, I didn’t know if you were going to use it, but I studied up on this,” Wallace said. “Do you know what those 4,000 people come where they are captured? Airports.”

“They’re coming a number of ways, they’re certainly, I’m not disagreeing with you that they’re coming through airports,” a flustered Sanders replied.

.@PressSec didn’t get grilled, she got eviscerated for the flat-out fabrications and pathetic factual distortions she, @realDonaldTrump and @SecNielsen keep pushing out there.

Sarah Sanders attempted to push the false claim about terrorists being caught at the southern border on Fox News Sunday and Chris Wallace was having none of it.https://t.co/qGBS6V8PR2 pic.twitter.com/cdDynlvxwA

Chris Wallace “I know the statistic, I didn’t know if you were going to use it, but I studied up on this. Do you know where those 4,000 people come, where they are captured? Airports.” Sarah Sanders didn’t see that coming! pic.twitter.com/OTHlck84xY

Previous Trump: I Can Relate To Unpaid Federal Workers [VIDEO]
Next Collins: Senate Should Vote On Spending Bill [VIDEO]