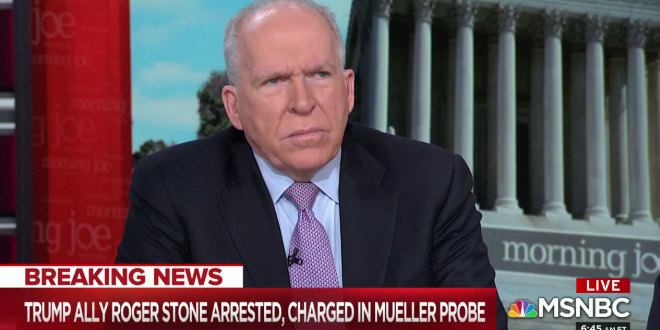 John Brennan: Expect More Indictments Of People With Names “Quite Familiar To The Average American”

Former CIA Director John Brennan on Friday predicted that there will be more indictments coming from special counsel Robert Mueller’s probe, including “a significant number of names that will be quite familiar to the average American.”

Brennan, who has emerged as a frequent critic of Trump, appeared on MSNBC’s “Morning Joe” shortly after news broke that longtime Trump associate Roger Stone was indicted and arrested by the FBI.

Brennan said he expects there to be a “significant number of indictments” within the next 60 days related to the probe of Russian interference and potential collusion between the 2016 Trump campaign and Moscow.

John Brennan: “A 7-count indictment is a very serious one … the special counsel’s office is uncovering the evidence it needs. So just like Mr. Stone’s indictment, I’m not going to be surprised by the other indictments that are going to be coming down the pike very soon.” @MSNBC