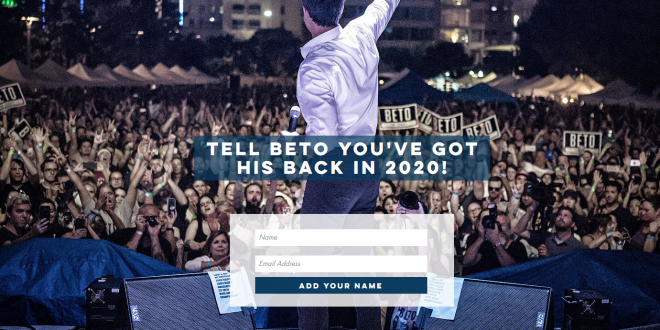 Patience has apparently already run out for some Democrats waiting on Beto O’Rourke to announce whether he’ll run for president.

A group of Democrats led by a key South Carolina Democrat and a TV actress have created a “Draft Beto” campaign with a goal of raising $1 million and setting up a grassroots network to help O’Rourke get a jump start on 2020 if he were to run.

“We believe by building the grassroots infrastructure and financial resources we’ll be able to not only convince Beto to run for the Democratic nomination but give him a head start,” the group states on its new website. “That’s why every single dollar we raise is put into an escrow account, which immediately transfers to Beto’s campaign if he decides to run.”

Tyler Jones, who worked as a chief strategist for Joe Cunningham’s stunning upset victory in a congressional race last year, will be the group’s South Carolina state director, and officials said they are interviewing strategists in Iowa and New Hampshire, as well.

Brown, a former member of the South Carolina House of Representatives, served as state chairman of Martin O’Malley’s presidential campaign in 2016. The former Maryland governor announced last week that he will not run for president again in 2020, endorsing O’Rourke.