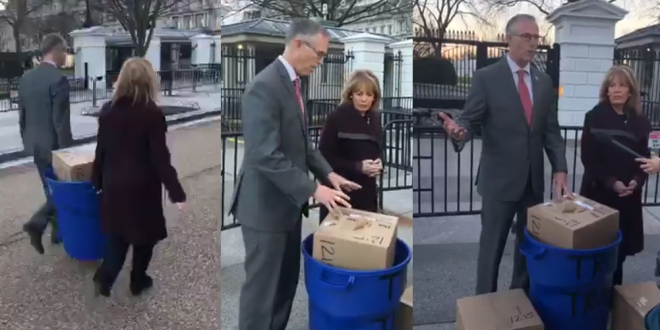 The White House got a first hand look — or maybe, smell — of the partial government shutdown’s impact Tuesday, thanks to a shipment of trash from California.

Reps. Jackie Speier, D-California, and Jared Huffman, D-California, picked up trash at Lands End and Ocean Beach with the group San Francisco Dog Owners over the weekend. Those are two of many national parks that have remained unstaffed for more than two weeks as the shutdown has dragged on.

Speier and Huffman decided to have some of the trash — three big boxes worth — shipped to Washington, D.C. and delivered to the White House and President Donald Trump to make a point about the shutdown, according to Speier’s office. The bags were sent using traditional shipping methods.

Dog poop was removed from the trash before being delivered. Pity.

Because Trump is ignoring the consequences of his ridiculous #shutdown, @RepSpeier & I are taking garbage we picked up at our national parks and delivering it to the White House. Our message is simple: @realdonaldtrump, open the gov. Watch @ 445 EST at https://t.co/Q0ZpyTfhL2 pic.twitter.com/9pixbj6d23