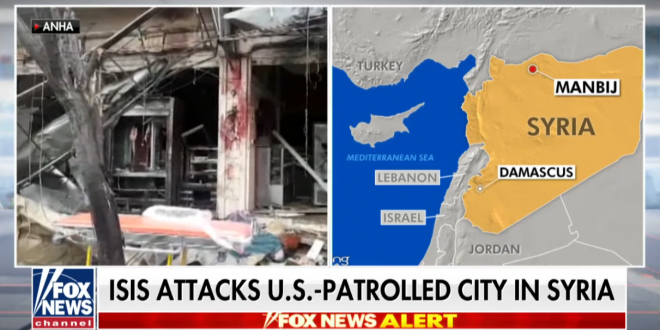 U.S. service members were among those killed by an explosion in Syria on Wednesday, a spokesperson for the coalition fighting the Islamic State group said. Earlier, a senior Kurdish security official told NBC News that members of the U.S.-led coalition were caught up in a blast at a market in the northern city of Manbij. The official could not confirm the number of injured or dead, but said Americans were among the casualties.

Forces were on foot in the city when they were approached at around 1 p.m. local time (6 a.m. ET) by a man wearing civilian clothing with explosives hidden underneath, the Kurdish official added.  ISIS claimed responsibility for the attack through recognized social media accounts, claiming a suicide bomber wearing an explosive vest attacked coalition forces. Manbij is located near the border with Turkey.

Four US soldiers have reportedly been killed in a suicide attack on a busy restaurant in Manbij claimed by Isis – just weeks after US president Donald Trump declared that the terror group was defeated in #Syria. https://t.co/05bcCoBu0V

JUST IN: U.S. troops were killed in a car bombing in Syria, and ISIS is claiming responsibility for the attack pic.twitter.com/BYvA0bPHe8