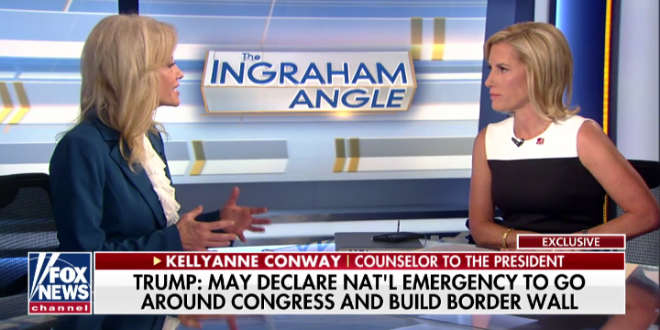 Conway Admits Sanders Lied About Terrorists At The Southern Border: It Was An “Unfortunate Misstatement”

White House press secretary Sarah Sanders made an “unfortunate misstatement” about border security, her colleague Kellyanne Conway said Monday. Sanders was fact-checked by “Fox News Sunday” host Chris Wallace on Sunday about her claim that about 4,000 known or suspected terrorists have been apprehended at the U.S.-Mexico border. Government figures show in fiscal 2017 most of them tried to gain entry by air, as Wallace noted.

During an appearance on Fox News on Monday, Conway, who has her own track record of gaffes, said Sanders’ numbers “got unfortunately conflated” with information about the 3,000 “special interest aliens” that were encountered by border security officials last year. “That was an unfortunate misstatement,” Conway told host Laura Ingraham of Sanders’ blunder. “Everybody makes mistakes, all of us. The fact is — it’s corrected here,” she added, referring to the DHS release.

Previous State TV Guest: You Could Shut Down Half Of The Government And Americans Wouldn’t Notice For Years
Next NORTH CAROLINA: House Candidate Mark Harris Trips Fire Alarm While Fleeing Reporters’ Questions [VIDEO]