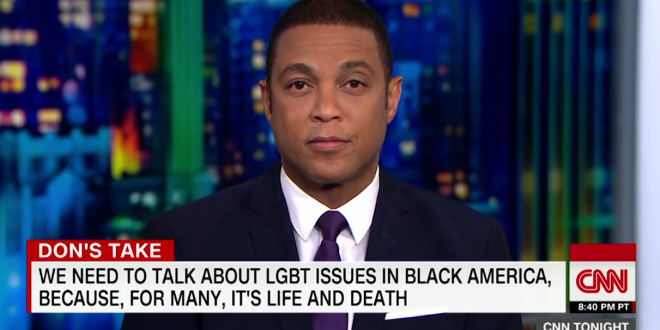 Don Lemon had an issue with comments Kevin Hart made during his interview on Ellen DeGeneres’ talk show, and he addressed them in an emotional segment on CNN Tonight Friday.

Lemon, who spoke on behalf of both the African-American and gay communities, noted that, while Hart has addressed his homophobic jokes in the past, there is no record of him apologizing for them until the apology he issued following his recent exit from his gig as Oscar host in light of the backlash over the decade-old remarks.

“We have to stop low-key co-signing homophobia. It’s not cool,” Lemon said, joining a number of members of the LGBTQ community who voiced criticism today over Hart’s interview where he portrayed himself as a victim. “We won’t tolerate jokes that do otherwise.”

“Kevin, if anything, this is the time to hear other people out,” said Lemon. “Walking away right now, that is your choice. But many of us need to keep the conversation going. It’s life or death. And someone like Kevin Hart, with one of the biggest megaphones in the world, can be a leader, the ultimate change agent.”

Lemon pointed out that LGBT homeless youth are disproportionately black, with black kids representing some 62% of homeless trans youth.

In this context, Hart’s mock violence against his potentially gay son is especially harmful. It may have been “a joke to Kevin,” said Lemon, “but the truth is that is a reality for many little boys in the United States. Somewhere, a black dad is beating his black son.”

GLAAD President Sarah Kate Ellis also appeared on the show Friday evening to discuss the latest developments concerning Hart and his suitability to host the Oscars.

Ellis said that GLAAD hopes “that he can still step up, not step down” to the hosting opportunity because the LGBTQ community needs “more allies than ever.” She referenced a recent FBI report that indicated hate crimes have increased by 17 percent.

“This is an enormous opportunity for him to use his voice and his platform and share his evolution,” she expressed. Ellis, who is gay, said that “people evolve, and LGBTQ people are open to acceptance.”

Make the time to watch the clip.

Previous Trump: I Don’t Care About Unpaid Federal Workers
Next Russian Minister: It’s Too Soon To Consider A Spy Swap