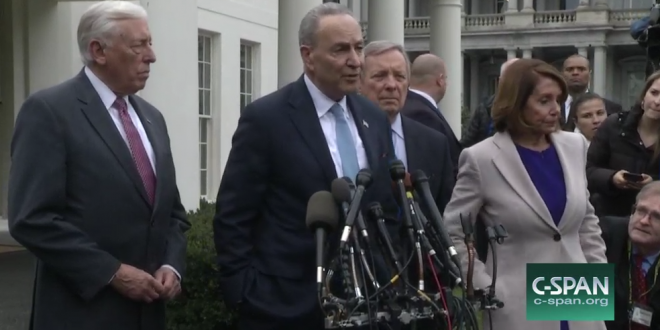 Democrats emerged from what they called a “contentious” two-hour meeting at the White House on Friday showing little optimism about ending a partial government shutdown.

Bipartisan congressional leaders huddled with President Donald Trump as they try to break an impasse over the president’s demand for $5 billion to build his proposed border wall.

The president threatened to keep nine U.S. departments closed “for a very long period of time — months or even years” — until he gets the funding, Senate Minority Leader Chuck Schumer said.

Breaking News: President Trump threatened to keep the government shut down for “months or even years,” said Senator Chuck Schumer after a contentious meeting https://t.co/XdjLavZ5kQ

Chuck Schumer: “We told the president we needed the government open. He resisted. In fact, he said he’d keep the government closed for a very long period of time. Months or even years.” Via ABC pic.twitter.com/5XYOoXH8mo

Previous GOP Rep. Matt Gaetz To Guest Host On Fox News
Next Trump May Declare National Emergency To Circumvent Congress On Wall Funding: “I’m Allowed To Do That”