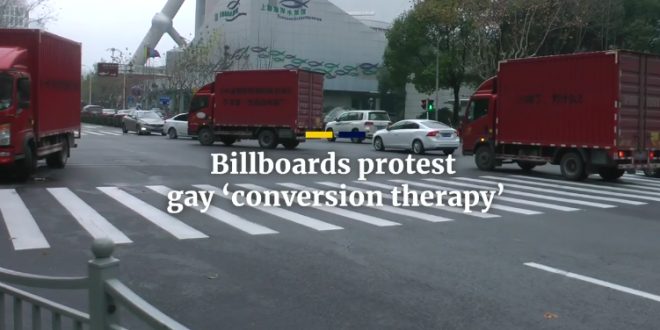 On a hazy day this week, a convoy of three white trucks is making its way through the streets of Nanjing, in eastern China. They are covered in huge red banners with black lettering that look like billboards from a distance.

“Treating a ‘disease’ that doesn’t exist,” reads one. “Chinese classification of mental disorders still includes ‘sexual orientation disorder’,” says another. And the third simply asks: “For 19 years, why?”

They slowly take their message across the Yangtze River, through a vine-covered ancient gateway, and past the New Street district, bustling with shoppers and office workers. It was based on the 2017 film Three Billboards Outside Ebbing, Missouri, in which the protagonist uses billboards to draw attention to her daughter’s unsolved rape and murder.

Hit the link for much more, including how activists opened a fake clinic to “turn straight people gay” and how a straight man went undercover at one of China’s 100+ ex-gay torture clinics.