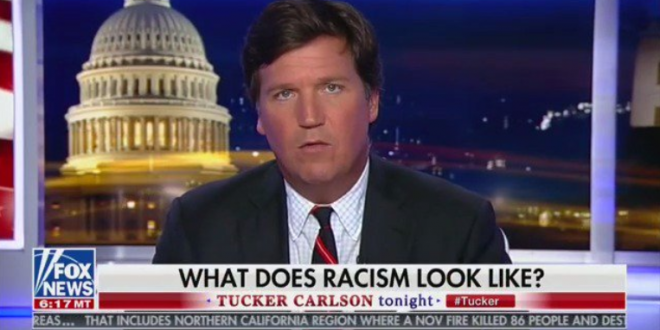 Carlson: White People Are The Real Victims Of Racism

“What would a racist do? A racist would support treating people differently based purely on their skin color. They’d hand out jobs and contracts and college admissions letters based on your DNA, rather than anything that you had done. They’d also say that some people’s opinions don’t matter because of their skin color. That would be a racist statement, wouldn’t it? They would ridicule people regularly on the basis of their skin color. Racism? Yeah. They would also believe in race-based retribution, most ominously. That means people of one race paying the price today for actions, decades or centuries ago, by people they may not have any relationship to at all other than a similar appearance.” – Tucker Carlson, on last night’s show.

In this remarkable clip, Tucker Carlson makes an impassioned case that white people are the victims of racism https://t.co/WlA0i5zyeb

Tucker Carlson picking up on this week’s conversation on racism and managing to, amazingly, not once mention ‘Steve King’ or his comments.
Sorta amazing, tbh pic.twitter.com/PPyeD2K1fY

Previous WHO Lists Anti-Vaxxers As Threat To Global Health
Next POLL: 57% Will “Definitely” Vote Against Trump In 2020