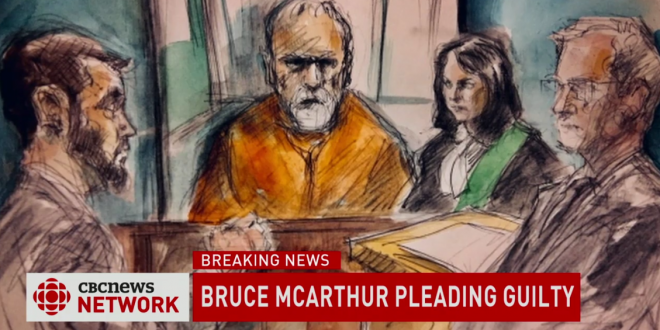 Accused serial killer Bruce McArthur has pleaded guilty to first-degree murder in the deaths of eight men, admitting to killings that began in 2010 and continued until late 2017.

The plea, entered in Superior court before Justice McMahon Tuesday morning, brings to a close a tragic and disturbing case that was unprecedented in this city, and a sprawling police investigation that brought praise and ardent criticism to Toronto police.

The 67-year-old self-employed landscaper — who was a familiar face in Toronto’s Church and Wellesley area, known as the Gay Village — was arrested in January 2018. Police charged him with first-degree murder in the deaths of two men, but alleged he killed others.

Jan. 17, 2019 marked a year since Bruce McArthur was arrested. Today, he pleaded guilty to the deaths of eight men. Remembering the missing men killed by McArthur. https://t.co/YffsZqrmb7

BREAKING: Bruce McArthur will plead guilty to all 8 counts of first-degree murder, the judge says. pic.twitter.com/c5kd95MYep