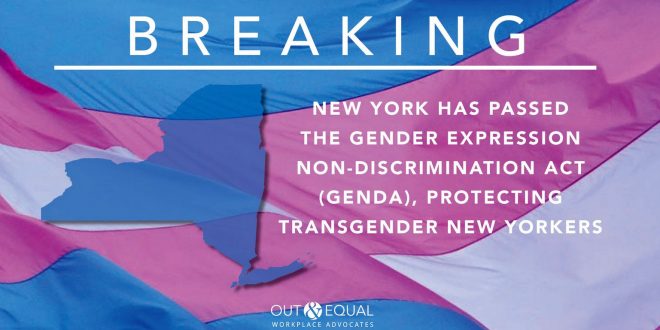 From the LGBT Bar Association of Greater New York:

Today we made history in New York! In an historic vote, both chambers of the New York’s Legislature finally passed GENDA—a measure to protect transgender and gender non-conforming people from discrimination statewide.

This turning point is a victory some 17 years in the making. Today is truly the dawn of a new era – an era in which all New Yorkers, no matter their gender, can feel protected under our law against the rollbacks and attacks coming from the federal government.

But that’s not all! We also passed a bill that will ban the barbaric practice of conversion therapy in New York. Every LGBTQ person is born perfect. We applaud Senator Brad Holyman, Assembleymember Dick Gottfried, and all the lawmakers who voted today to codify these crucially important civil rights protections.

HRC celebrated the historic passage of the Gender Expression Non-Discrimination Act (GENDA) in New York as well as legislation protecting LGBTQ youth in the state from the dangerous and debunked practice of so-called “conversion therapy.”

GENDA would solidify existing law by explicitly adding gender identity and expression to the New York Human Rights Law. The bill has passed the New York Assembly 11 times, and today marks the first time it has passed both chambers. Both bills will now head to Governor Andrew Cuomo’s desk to be signed.

There is no credible evidence that conversion therapy can change a person’s sexual orientation or gender identity or expression. To the contrary, research has clearly shown that these practices pose devastating health risks for LGBTQ young people such as depression, decreased self-esteem, substance abuse, homelessness, and even suicidal behavior.

The New York State Legislature voted Tuesday to ban so-called gay conversion therapy on minors, with Democratic Gov. Andrew Cuomo expected to sign the bill as soon as this week.

The measure, which passed 57-4 in the Senate and 134 to 3 in the Assembly, will make New York the 15th state to ban the controversial practice, which is widely discredited by medical and mental health organizations.

“New York has a compelling interest in protecting the physical and psychological well-being of minors, including lesbian, gay, bisexual, and transgender youth,” the bill reads in part, “and in protecting its minors against exposure to serious harms caused by sexual orientation change efforts.”

GENDA, the gender expression non-discrimination act, passed both houses of the NY state legislature this morning. @kiaraditmas of @NYTransAdvocacy speaks to it, flanked by @bradhoylman and @DickGottfried pic.twitter.com/l2bPmyBkkV

#Congratulations to the New York Senate for passing both GENDA and a ban on Conversion therapy. It’s been 12 years of hard work and it’s nice to see it come to fruition. #WontBeErased #BornPerfect

Today is a historic day in Albany for New York’s LGBTQ+ community as we finally pass #GENDA & ban conversion therapy. Finally, every New Yorker will be finally protected by New York State law from the scourge of discrimination because of their gender identity or expression. pic.twitter.com/yr4Zq7n0rL