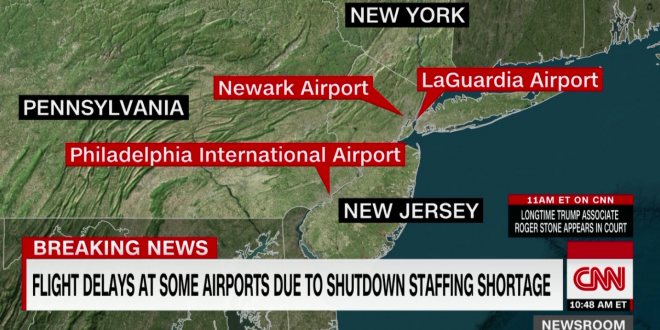 A ground stop has been ordered at LaGuardia airport due to staffing related issues, the Federal Aviation Administration said Friday. The stop was ordered shortly before 10 a.m. Some arriving flights are also being delayed. The government shutdown has entered its 35th day, the longest federal shutdown over.

Significant flight delays were rippling across the Northeast on Friday because of a shortage of air traffic controllers as a result of the government shutdown, according to the Federal Aviation Administration. The agency said it was slowing traffic in and out of the airport because of a staffing problem. The controllers union warned on Wednesday that an acute shortage of controllers, who have been working without pay for more than a month was creating risks to the air-travel system.

LATEST: The FAA has halted flights into LaGuardia Airport due to air traffic control staffing shortages. This comes one day after airline executives warned the shutdown is pushing the U.S. aviation system to the “tipping point” https://t.co/dng5uGqfcn pic.twitter.com/56reRNoWtX

Airlines are telling me the FAA has not halted ALL flights into LGA. Planes are landing and taking off. The rate of them has slowed

BREAKING: Amid halt on incoming flights at LaGuardia, outgoing traffic at Phildelphia and Newark airports now also delayed due to staffing issues https://t.co/jzYjmherf9

Previous John Brennan: Expect More Indictments Of People With Names “Quite Familiar To The Average American”
Next LIVE VIDEO: Roger Stone Appears In Court After Arrest