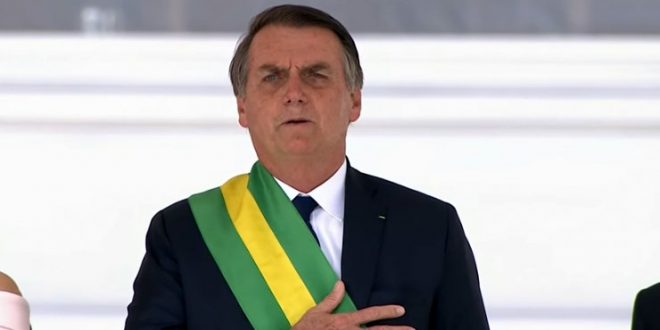 Newly installed President Jair Bolsonaro targeted Brazil’s indigenous groups, descendants of slaves and the LGBT community with executive orders in the first hours of his administration, moving quickly after a campaign in which the far-right leader said he would radically overhaul many aspects of life in Latin America’s largest nation.

In removing LGBT concerns from the responsibilities of the human rights ministry, Bolsonaro did not name any agency to consider such issues. He has strongly criticized what he calls “gender-based ideology,” saying it is a threat to Brazil’s Christian values.

Damares Alves, the new human rights minister, did not discuss the LGBT order in her first address on the job, but the evangelical pastor has insisted over the years that “the Brazilian family is being threatened” by diversity policies.

Alves today said: “There will be no more ideological indoctrination of children and teenagers in Brazil.”

Brazil has seen a surge in same-sex marriages in recent weeks out of fear that Bolsonaro may try to undo the nation’s landmark 2013 ruling by the National Justice Council.

Previous NASA Probe Sends Back First Images Of Ultima Thule
Next Pelosi’s Message To Trump: “Nothing For The Wall”