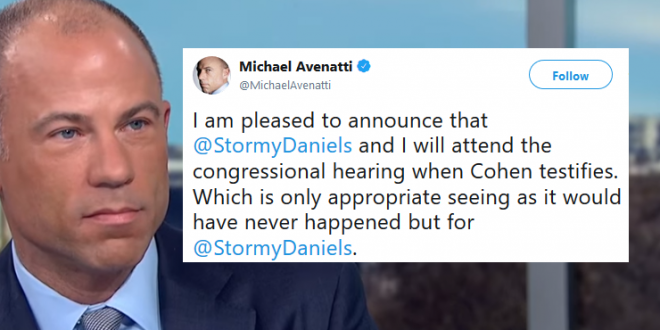 Cohen is scheduled to testify before the powerful House Oversight and Reform Committee on Feb. 7 and will face questions from Democrats on links between the Trump campaign and Russia and his admissions about hush-money payments to women alleging affairs with Trump.

He was sentenced to three years in federal prison and will voluntarily surrender to federal authorities on March 6.

I am pleased to announce that @StormyDaniels and I will attend the congressional hearing when Cohen testifies. Which is only appropriate seeing as it would have never happened but for @StormyDaniels.

If you’re so pro women’s rights why aren’t you letting her make this announcement rather than trying to take the spotlight for yourself and stay relevant?

Do you honestly think anyone can tell me what to fucking do? Amazing that everyone keeps forgetting that I sought out an attorney and then CHOSE AND HIRED him! Michael has never abused me and if he were to try it, I’d bitch slap him into next week.