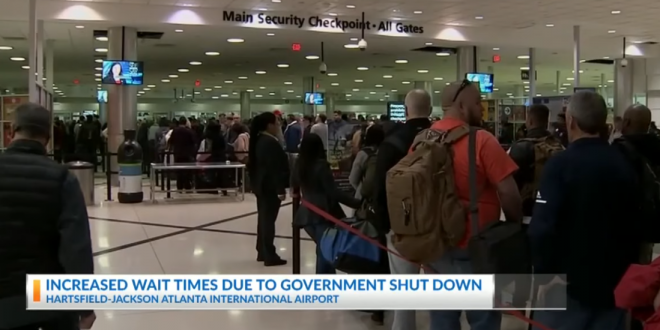 Passengers at the nation’s busiest airport are feeling the pinch of the government shutdown and it’s coming in the forms of long security lines. Atlanta’s Hartsfield-Jackson International Airport is warning passengers to give themselves at least three hours to clear security.

“We are seeing some pressure on our business,” Bastian said during an investor conference call Tuesday morning. “We strongly encourage our elected officials to do their very best to resolve their differences and get the government fully open as soon as possible.”

Massive security lines today at ATL! Passengers stuck for more than an hour and many missed flights. We’ll tell you about possible govt. shutdown impact and the TSA’s response, at 5 on @wsbtv. https://t.co/t1tY8fM540 pic.twitter.com/imCxZMSxbS

At #ATL airport where it takes 2 and 1/2 hours to clear TSA security. Missed two flights. Total chaos thanks to #Trumpshutdown. Missing a flight is nothing compared to missing a pay check. For the sake of workers and their families end this #shutdown now! pic.twitter.com/rZDetxAAOj