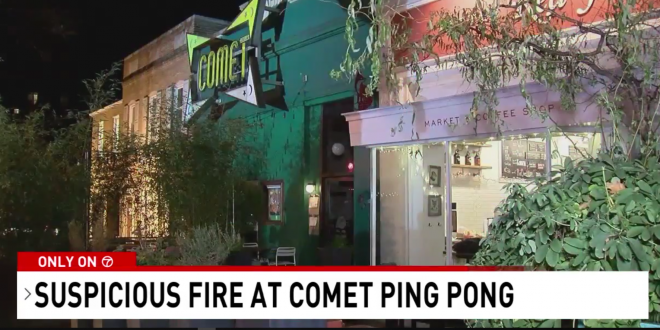 A D.C. restaurant that was once at the center of an online conspiracy theory dubbed “pizzagate” was intentionally set on fire, fire officials say.

Firefighters responded to a small fire at Comet Ping Pong on Connecticut Avenue NW about 9:20 p.m. Wednesday night, D.C. Fire and EMS said. They found that employees had put out the fire that spread to some curtains and window coverings inside the restaurant, the fire department said.

Authorities described the suspect as a white man, 25 to 30 years old with blonde hair, a mustache and a beard. He was wearing a blue and white varsity style jacket and blue jeans at the time of the fire.

A restaurant employee told ABC7 News that the unknown man bought three beers, paid with a credit card, and tipped more than 20 percent.

He then allegedly set that curtain on fire, and left behind a diaper and baby food, seemingly nodding to a debunked conspiracy theory linking Comet to a child sex ring led by Hillary Clinton.

That same false narrative led a North Carolina man to open fire at Comet back in 2016. A DC Police car is now parked out front providing loyal customers with peace of mind.