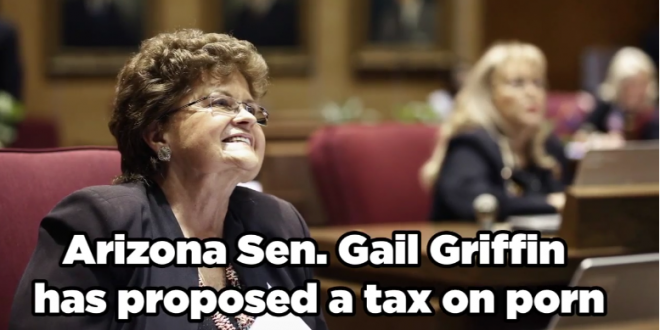 A GOP lawmaker has a novel idea for how a border wall with Mexico should be funded: Force every Arizonan who wants to access pornographic material on an electronic device to pay $20.

Republican Rep. Gail Griffin, R-Hereford, has introduced House Bill 2444, which would make “distributors” of devices that allow access to the internet install software to make the offending material not viewable. To remove the blocking software, a person would have to pay the state $20.

Those distributors, which include both manufacturers and retailers, would also be able to impose their own fees for removing the blocker. “It’s pretty clearly unconstitutional,” said Mike Stabile, a spokesman for the Free Speech Coalition. The Free Speech Coalition is a non-profit that lobbies on behalf of the adult entertainment industry.

Griffin’s bill, you’ll be shocked to learn, is the work of notorious nutjob Chris Sevier, who has sued to end same-sex marriage in multiple states by claiming that he has the right to marry his computer. Earlier this month Sevier lost a Texas lawsuit to end Drag Queen Story Hour at a public library.