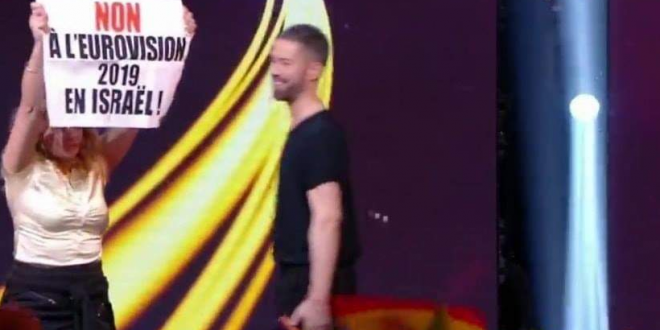 Anti-Israel protesters briefly interrupted a Eurovision song contest qualifying round in France Saturday, as Israeli singer Netta Barzilai stood on stage. A broadcast of the concert showed four or five protesters rush the stage, with at least one person holding a sign reading “No to Eurovision 2019 in Israel,” before being swiftly escorted away.

The incident occurred as the host was introducing semi-finalists to represent France at the annual song contest, to be held in Tel Aviv in May, with Barzilai standing beside him. Barzilai, whose victory in the 2018 contest gave Israel hosting rights, performed her winning song “Toy,” during the Paris show.

The BDS France movement took credit for the stunt on its Twitter page, using the hashtags “#DestinationApartheid” and “#BoycottEurovision2019.”

Barzilai appeared briefly uncomfortable on stage as the protesters were being removed, but recovered quickly to wish the competitors luck. “You’re giving the beautiful gift of music tonight,” she told the contestants. “Just be yourself. You’re amazing.”

Netta’s 2018 winning entry is second below.