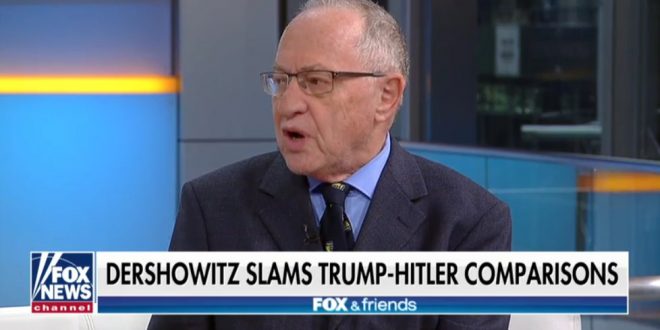 Alan Dershowitz: Anybody Who Compares Trump To Hitler Is “Essentially A Holocaust Denier” [VIDEO]

“Everybody is compared to Hitler. Everybody is compared to the Holocaust. Israel defending itself against Gaza rockets — oh, they’re Nazis. Anybody who compares Trump or anybody else to Hitler essentially is a Holocaust denier, because what they’re saying is, ‘Well, there were no gas chambers, there was no Auschwitz, there was no plan to kill six million Jews.’ They minimize it. To say that anything that happened since then is comparable to the Holocaust and certainly to compare the American political system to anything that happened in the Holocaust is just outrageous.” – Trump cultist Alan Dershowitz, speaking this morning on Fox & Friends.