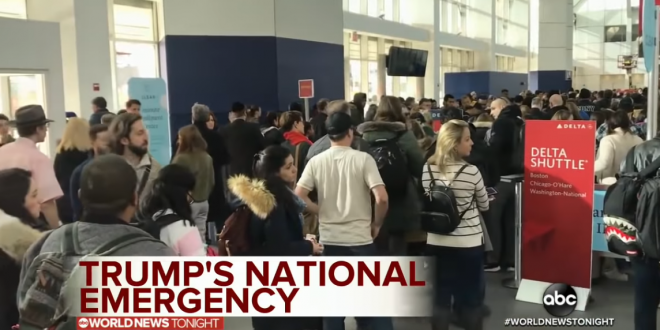 Starting on Sunday, the sickouts appeared to be having an impact on wait times at a handful of typically-busy security checkpoints.

At New York’s LaGuardia airport, passengers passing through Terminal C, which is primarily inhabited by Delta Air Lines, were subject to wait times of around 90 minutes. TSA Precheck, the service that typically expedites pre-cleared passengers through security, was also closed at that checkpoint.

This is the TSA screening line for Terminal 2 at MSP this morning. It extends out to the parking garage. MSP officials are missing in action. Thanks Trump. pic.twitter.com/XJfyKhcEXW

Ive been sitting on the floor at the Miami airport customs line for two hours now because every single TSA post is closed. #ShutdownStories

It took someone I know, 1 hour 20 minutes to get thru TSA at MIA this morning. If u think a partial shutdown won’t cause chaos & pain not only to some federal workers, but also to regular Americans & the economy, you’re wrong. And if you think Trump can relate, you’re dead wrong.