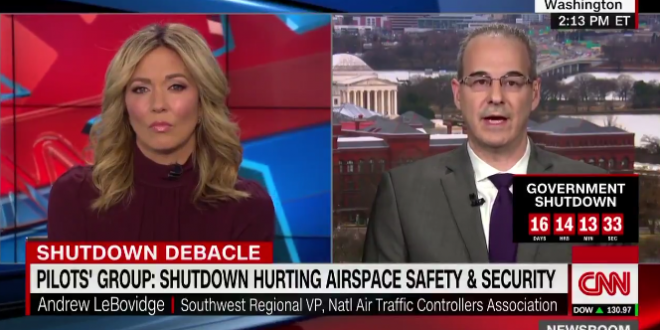 Remember back in 2017 when Trump claimed credit for zero jetliner crashes that year? Don’t expect him to own any that happen in 2019 because of something he actually did.

Andrew LeBovidge, the leader of the National Air Traffic Controllers Association, on Monday predicted that the partial government shutdown’s “ripple effect” may last months, “if not years,” for aviation safety professionals.

LeBovidge appeared on “CNN Newsroom” on Monday, 17 days into the government shutdown that has left 800,000 federal employees furloughed or working without pay.

“The men and women that we represent, nearly 20,000 aviation safety professionals, are diligently working through this shutdown to be guardians of our skies and they have the uncertainty of not knowing when their next paycheck is arriving,” LeBovidge said. “The shutdown to us is unacceptable and it needs to end.”

According to LeBovidge, air traffic control towers are already understaffed and the shutdown means that training new staffers and modernizing decades-old equipment has halted.

Regional VP of the National Air Traffic Controllers Association says the shutdown is having a “dramatic” effect on workers.

“Training has stopped… And we will feel the ripple effect of the lack of personnel for months if not years to come.” https://t.co/cUsQeaqNfV pic.twitter.com/3iJxwnl4w9