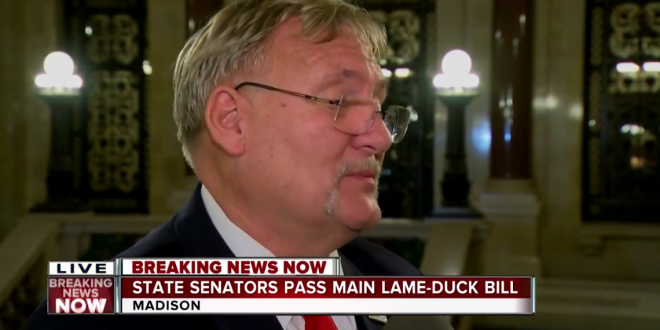 The Wisconsin Senate voted just before sunrise Wednesday following an all-night session to pass a sweeping bill in a lame-duck session designed to empower the GOP-controlled Legislature and weaken the Democrat replacing Republican Gov. Scott Walker.

Republicans pushed on through protests, internal disagreement and Democratic opposition to the measures designed to reduce the powers of incoming Democratic Gov.-elect Tony Evers and Democratic Attorney General-elect Josh Kaul.

Both Evers and Kaul urged Republicans not to do it, warning that lawsuits would bring more gridlock to Wisconsin when the new administration, and the first divided government in 10 years, takes over.

The Wisconsin Senate voted 17-16 to pass the latest, most expansive bill curbing the powers of the incoming governor and attorney general. The Assembly is yet to vote. Still more than an hour until sunrise.