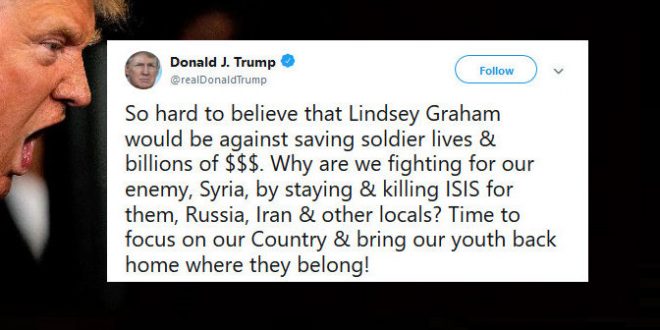 Lindsey Graham, like many others, has called out Trump’s lie that ISIS has been defeated. Therefore he too must be destroyed.

“I give the president all the credit in the world for changing their policies regarding the fight against ISIS, but I will not buy into the narrative that they have been defeated,” Graham said, adding that he had just returned from visiting with troops in Afghanistan. “To say they’re defeated is an overstatement and is fake news,” Graham added. “It is not true. They have been severely damaged, but they will come back unless we’re there to stop them.”

So hard to believe that Lindsey Graham would be against saving soldier lives & billions of $$$. Why are we fighting for our enemy, Syria, by staying & killing ISIS for them, Russia, Iran & other locals? Time to focus on our Country & bring our youth back home where they belong!

People who think this is a bad idea:

2. They are fighting for us not Syria.https://t.co/A376detPgC

3. People who think this is a good idea to withdraw from Syria:

Previous Pelosi: I Was Too Busy To Watch Paul Ryan’s Farewell
Next Limbaugh: Trump Just Sent Me An Instant Message Vowing To Shut Down Government If Wall Isn’t Funded