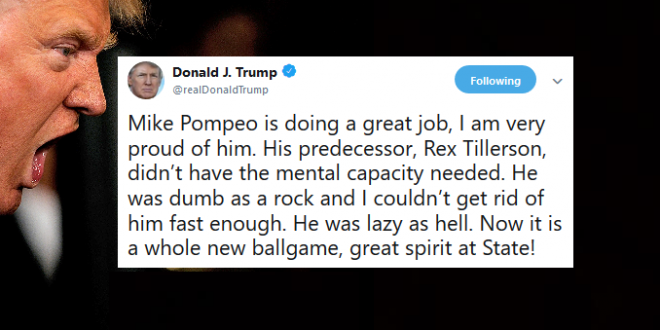 Trump: Rex Tillerson Was “Lazy And Dumb As A Rock”

Glorious Leader is ever so pissed at his former secretary of state Rex Tillerson, who earlier today declared (on video) that his former boss is undisciplined, won’t read anything, much less his press briefings, and had to be talked about committing “illegal acts” multiple times. The infighting will never end. But now the press gets to resurface all of the fawning praise for Tillerson spouted by Trump in the past.

Mike Pompeo is doing a great job, I am very proud of him. His predecessor, Rex Tillerson, didn’t have the mental capacity needed. He was dumb as a rock and I couldn’t get rid of him fast enough. He was lazy as hell. Now it is a whole new ballgame, great spirit at State!

WATCH: Former Secretary of State Rex Tillerson is speaking publicly about what led to his firing in March by President Trump.

Previous Giuliani: Mueller Thinks Manafort Is Lying About Trump
Next GOP Rep-Elect Mark Harris: I Had No Foreknowledge Of Any “Wrongdoing” But I’m Totally Up For A Do-Over