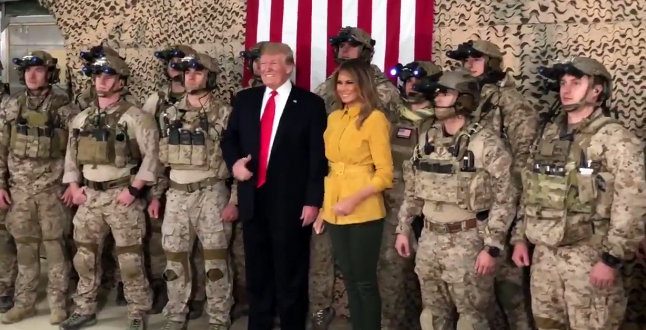 President Donald Trump and the White House communications team revealed that a U.S. Navy SEAL team was deployed to Iraq after the president secretly traveled to the region to meet with American forces serving in a combat zone for the first time since being elected to office.

The president’s video posted Wednesday did not shield the faces of special operation forces. Current and former Defense Department officials told Newsweek that information concerning what units are deployed and where is almost always classified and is a violation of operational security.

As president, it is technically within Trump’s job description to declassify that sort of information, but it does violate protocol designed to keep secret locations of special forces secret.

“The deployments of special operation forces, including Navy SEALs are almost classified events, as to protect those men and women that are on the front lines of every overt and covert conflict the United States is involved in,” a Defense Department official said.

“Even during special operation demonstrations for congressional delegations or for the president or vice president, personnel either have their faces covered or their face is digitally blurred prior to a release to the general public.”

.@FLOTUS Melania and I were honored to visit our incredible troops at Al Asad Air Base in Iraq. GOD BLESS THE U.S.A.! pic.twitter.com/rDlhITDvm1

After Trump visited Iraq, he posted a video to his Twitter account that may have compromised operational security and violated procedures designed to safeguard the identities of U.S. special operation forces, especially when deployed to a combat zone. https://t.co/UOQjskCJsn

Trump tweeted a video exposing the identity of several Navy SEALs. If you put that detail in a movie about a moron-becoming-POTUS, that detail would be thrown out as "too on the nose” and “too dumb even for a dumb President. We are in “stranger than fiction” land.