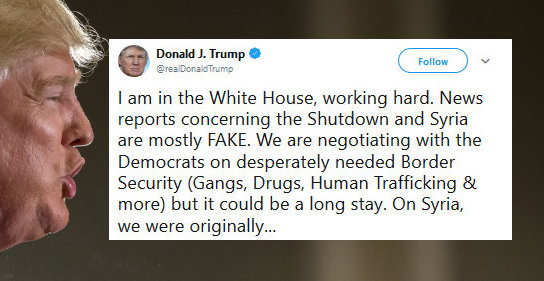 President Donald Trump tweeted this morning to decry “mostly FAKE” news about the shutdown and his decision to withdraw from Syria. He also defended his Syria decision, though he said this time that ISIS is “largely defeated.”

Trump’s tweets were posted around the time news broke that the top U.S. envoy to the global coalition fighting ISIS submitted his resignation yesterday over his objections to the President’s Syria announcement.

I am in the White House, working hard. News reports concerning the Shutdown and Syria are mostly FAKE. We are negotiating with the Democrats on desperately needed Border Security (Gangs, Drugs, Human Trafficking & more) but it could be a long stay. On Syria, we were originally…

….going to be there for three months, and that was seven years ago – we never left. When I became President, ISIS was going wild. Now ISIS is largely defeated and other local countries, including Turkey, should be able to easily take care of whatever remains. We’re coming home!