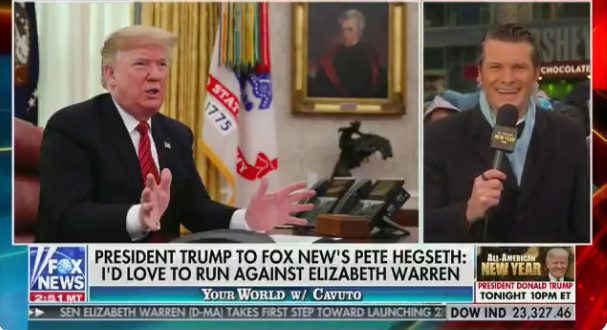 Trump On Whether Elizabeth Warren Can Win In 2020: I Don’t Know, You’d Have To Ask Her Psychiatrist [VIDEO]

“That didn’t work out too well. I think you have more than she does and maybe I do, too. And I have nothing. So, you know, we’ll see how she does. I wish her well. I hope she does well. I’d love to run against her.”

Hegseth went on to ask Trump whether Warren truly believes she can take the White House in 2020. “Well, that I don’t know. You’d have to ask her psychiatrist,” Trump said, slyly.

Pete Hegseth: Elizabeth Warren “says she’s in the fight all the way Mr. President, do you really think she believes she can win?”

President Donald Trump: “Well, that I don’t know. You’d have to ask her psychiatrist.” pic.twitter.com/sOzH6JZFrk