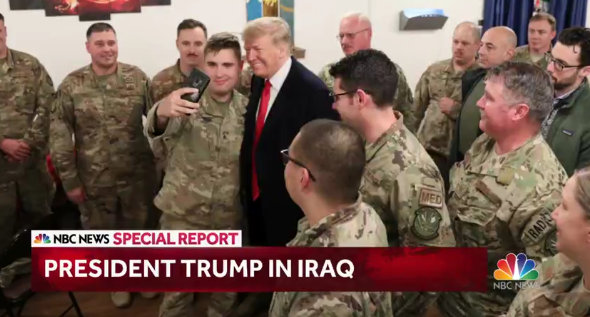 President Trump used the cover of the partial government shutdown to slip off to visit US troops in Iraq. Trump and first lady Melania Trump met with military personnel on Wednesday at Al Asad Air Base in Iraq, according to photos from Reuters. His whereabouts sparked speculation about what Trump was up to because he hadn’t tweeted in more than 17 hours, no press aides were in the media office and lights were turned off on the second floor where White House Press Secretary Sarah Huckabee Sanders has her office.

BREAKING: Pres. Trump made unannounced visit to Al Asad Air Base in Iraq on his first visit to U.S. troops in the the Middle East as president. https://t.co/cB0GCwPGD2 pic.twitter.com/aVd3iffNdg

JUST IN: President Trump and the First Lady traveled to Iraq late on Christmas night to visit with troops and Senior Military leadership “to thank them for their service, their success, and their sacrifice and to wish them a Merry Christmas” – Press Sec. pic.twitter.com/N101Xlx5dZ