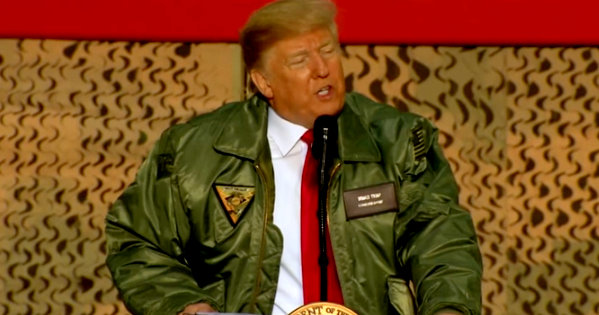 Trump Lies To Troops, Claims He Gave Them 10% Raise

In fact, military members have seen a pay raise in each of the last 10 years, ranging from 1 percent to 3.9 percent, according to the Defense Department.

They even saw pay bumps when other federal workers were subjected to a three-year pay freeze in the wake of the Great Recession.

The pay increase for 2019 passed by Congress and signed by the president in August will be 2.6 percent, the largest since 2010. It is not far above last year’s raise for troops, which was 2.4 percent.

Note to @realDonaldTrump: Had you served in the military you would know that each month we get a Leave and Earnings (LES) statement that shows our pay. So many military members know you are lying about their paycheck, but they are respectful so they don’t say that to your face. https://t.co/4K5ZZKBZZn

Pres Trump spent 3 hours in Iraq:
1) lied about 10% pay increase to troops
2) revealed classified identity of Navy SEALs
3) possibly violated rules against political activity on a military base
4) broke protocol by a visiting head of state by not going to meet Iraqi PM

#POTUS speech to the troops fact-checked by Ali Rogin of ABC News.
1. Trump lied military got its first pay raise in 10 years: https://t.co/rILhXQLbve
2. Trump also lied that he raised their pay by 10%: https://t.co/AnRTVEMGiU pic.twitter.com/XiHp1pL1s6