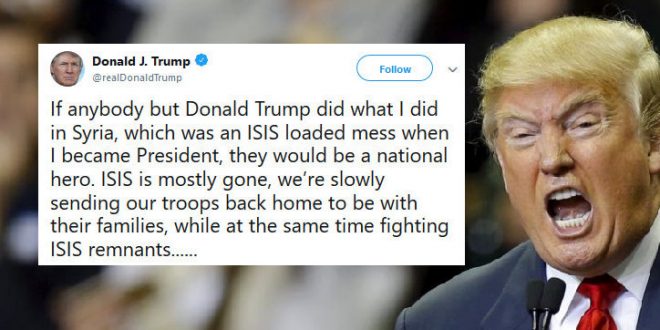 Trump Lashes Out At “Failed Generals” Over Syria/ISIS

On New Year’s Eve, President Trump apparently felt the need to clear the air and defend his position via a short series of tweets that explained his process as a simple fulfillment of his campaign promise.

And, as his is wont, he included some not-so-subtle digs at his detractors.

Trump’s dig at “some failed generals” is certainly a dig at Gen. Stanley McChrystal, who in a recent interview with ABC News’ Martha Raddatz, spared little criticism for a president who he sees as “immoral.”

If anybody but Donald Trump did what I did in Syria, which was an ISIS loaded mess when I became President, they would be a national hero. ISIS is mostly gone, we’re slowly sending our troops back home to be with their families, while at the same time fighting ISIS remnants……

…I campaigned on getting out of Syria and other places. Now when I start getting out the Fake News Media, or some failed Generals who were unable to do the job before I arrived, like to complain about me & my tactics, which are working. Just doing what I said I was going to do!

…..Except the results are FAR BETTER than I ever said they were going to be! I campaigned against the NEVER ENDING WARS, remember!

I campaigned on Border Security, which you cannot have without a strong and powerful Wall. Our Southern Border has long been an “Open Wound,” where drugs, criminals (including human traffickers) and illegals would pour into our Country. Dems should get back here an fix now!