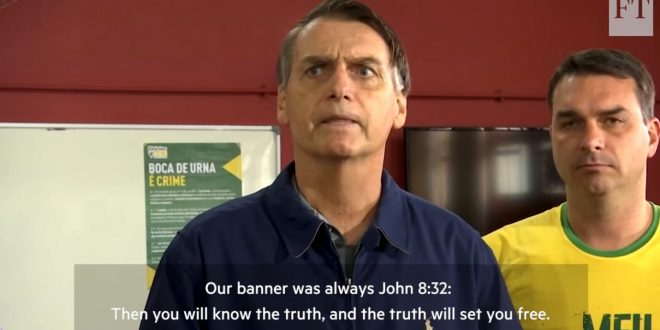 Secretary of State Mike Pompeo will head a U.S. delegation to Brazil seeking to foster closer ties with the far-right incoming president, Jair Bolsonaro, and discuss ways to counter the Venezuelan government.

Pompeo will leave Washington for Brasilia on New Year’s Eve to attend Bolsonaro’s inauguration the following day before heading to Colombia.

He plans to meet with Bolsonaro, who was elected in October with an agenda and style so similar to President Trump’s that he has been dubbed the Trump of the Tropics.

From an October report:

Many of Bolsonaro’s core backers are also huge fans of Trump — a leader with whom Bolsonaro shares striking parallels.

Bolsonaro is a tough talker whose strongest followers include white men who feel left behind by economic and social change. He champions “traditional values” but has been married three times. He reaches out to his legions of followers via social media.

Bolsonaro’s backers in far-right movements have cheered on his infamous political incorrectness for years. He once said a gay son was the product of not enough “beatings” and told a female rival she was not worth raping because she was “too ugly.”