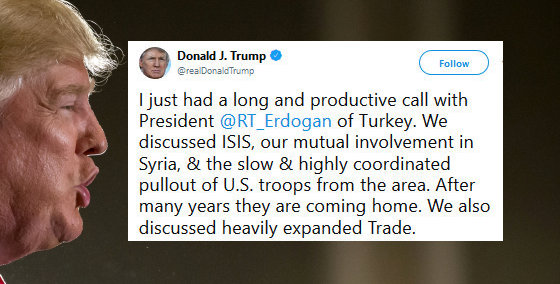 Turkish President Tayyip Erdogan and U.S. President Donald Trump agreed on Sunday to coordinate to prevent an authority vacuum from developing as the United States withdraws from Syria, the Turkish presidency said.

In a phone call between the two leaders, Erdogan also expressed satisfaction with steps taken by Washington regarding combating terrorism in Syria and said Turkey was ready to provide any type of support, the presidency said.

The US plans to coordinate its Syria troop pullout with Turkey, US President Donald Trump said as Prime Minister Benjamin Netanyahu continued to defend the measure which could bolster Iran at Israel’s expense.

The Turkish news outlet, TRT World, reported Sunday that its country had sent a convoy of military equipment and personnel into an area of Syria controlled by the Free Syrian Army, a Turkish ally.

I just had a long and productive call with President @RT_Erdogan of Turkey. We discussed ISIS, our mutual involvement in Syria, & the slow & highly coordinated pullout of U.S. troops from the area. After many years they are coming home. We also discussed heavily expanded Trade.

Previous Schiff: Democrats Will Subpoena Mueller’s Report If Trump Tries To Keep It Secret Via Executive Privilege
Next GOP Sen. Bob Corker Fires Back After Trump Posts Lies About Him: “Yeah, Like Mexico Is Paying For The Wall”