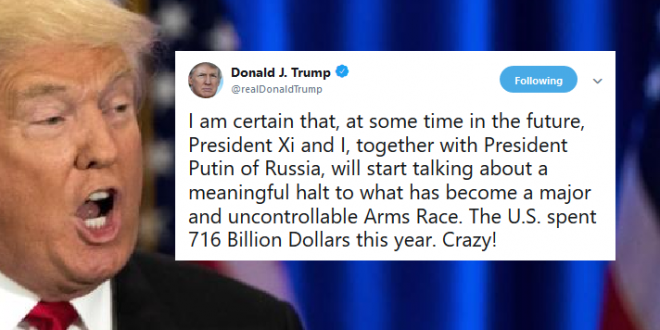 Let’s go back just six weeks, shall we?

President Donald Trump told reporters Monday that the United States would increase its nuclear arsenal until other nations “come to their senses,” threatening an arms race days after he said he would withdraw the US from a Cold War nuclear treaty. Trump announced over the weekend that he intended to pull the US out of the Intermediate-Range Nuclear Forces Treaty (INF) with Russia and accused Moscow of violating the deal.

The signing of the treaty in 1987 was seen as a watershed moment during the end days of the Cold War, helping to eliminate thousands of land-based missiles with ranges between approximately 300 and 3,400 miles. Trump repeated on Monday that Russia had not adhered to the treaty and said his vow to increase the US nuclear stockpile included a posture against China as well. His threat to increase the US nuclear arsenal prompted international concern.

I am certain that, at some time in the future, President Xi and I, together with President Putin of Russia, will start talking about a meaningful halt to what has become a major and uncontrollable Arms Race. The U.S. spent 716 Billion Dollars this year. Crazy!

More moment-to-moment Trump rhetoric: in most of his rally speeches, he boasts that he personally raised the military budget to $716 billion, and it’s necessary. Today “the U.S.” did it, and it’s “crazy!” pic.twitter.com/sg3BAT338e

He has frequently touted this number at his rallies to tell his supporters how much he cares about the military. https://t.co/GRqYgFLI2h

Previous AP: Bernie 2020 Is “Almost A Foregone Conclusion”
Next Springsteen: I’m Not Seeing A Dem Winner For 2020