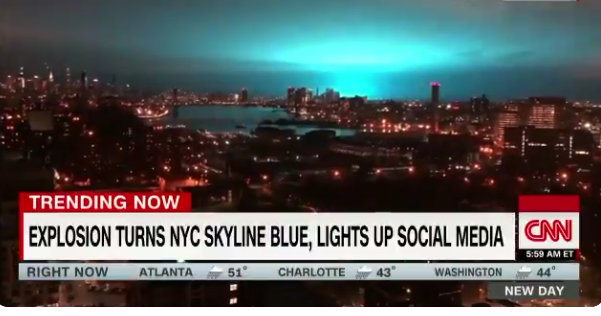 A transformer exploded at a power plant in Queens Thursday night, lighting up the sky over New York City while causing some flight delays and scattered power outages.

The power outages affected operations at LaGuardia Airport. There was a total ground stop at the airport for about a half hour before power was restored and flights resumed with some delays and cancellations.

New Yorkers reported seeing massive blue lights in the city following the explosion and took to social media to share photos and videos.

There was a brief electrical fire at our substation on 20th Avenue & 32nd Street in Astoria this evening, which caused a transmission dip in the area. All power lines serving the area are in service and the system is stable. Photo: Michael Friedl, New York Times pic.twitter.com/vq2Ao46rhk

ADVISORY: The lights you have seen throughout the city appear to have been from a transformer explosion at a Con Ed facility in Queens. The fire is under control, will update as more info becomes available. Follow @fdny, @NYPD114pct and @conedison. pic.twitter.com/fdzQKs1wVV

Is this an alien invasion? pic.twitter.com/ED4G94tQYo

See? Shut down the federal government for like a week and now aliens have invaded Manhattan

No, it wasn’t an alien invasion. A power plant explosion last night turned the NYC night sky an eerie blue and shut down one of the world’s busiest airports. @GioBenitez has the story. https://t.co/C85wotrArF pic.twitter.com/aC7wCiZ0Gj

In my neighborhood this evening… Astoria, Queens NY… Aliens??? pic.twitter.com/JhXRh0NiXm

here’s a second look with the Queens 7 train approaching and the brilliant blue sky lighting up overheard. went on for maybe 3 minutes total

alexa show me what the alien arrival looks like pic.twitter.com/NmZNXIybLD