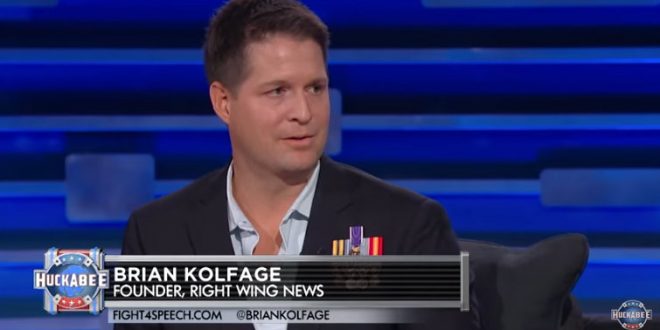 The GoFundMe Wall Guy Is A Fake News Kingpin

An internet fundraiser for Donald Trump’s border wall took in more than $7 million from over 131,000 donors by early Thursday evening. The Florida man behind the GoFundMe page, a triple-amputee Iraq War veteran named Brian Kolfage, spent a large portion of the fundraising campaign’s description outlining his past, including a bolded section titled “How do you know this is not a scam?”

The fundraising page doesn’t mention Kolfage’s most recent business venture, a Facebook page titled Right Wing News and a ring of affiliate sites that frequently trafficked in conspiracy theories. In October, Right Wing News was pulled down by Facebook in a sweep of more than 559 pages that the company said were “using fake accounts… to drive traffic to their websites.”

Kolfage was also responsible for running several of Right Wing News’ shuttered affiliate sites including VeteranAF and FreedomDaily, which included several false conspiracy theories such as Hillary Clinton hiding a deadly illness and stories of fake voter fraud in the days leading up to the 2016 election.

The shuttering of Kolfage’s sites took place one month after a Michigan man, Joel Vangheluwe, sued FreedomDaily and other right wing sites for falsely identifying him as the driver of the car that ran over several peaceful protestors during a 2017 white supremacist rally in Charlottesville.

At this writing Kolfage’s GoFundMe page has raised over $11 million. Where that money will actually go is anybody’s guess.

Previous Glorious Leader: I Know Technology Better Than Anyone
Next WaPo: Trump Has Publicly Lied 7546 Times In 700 Days