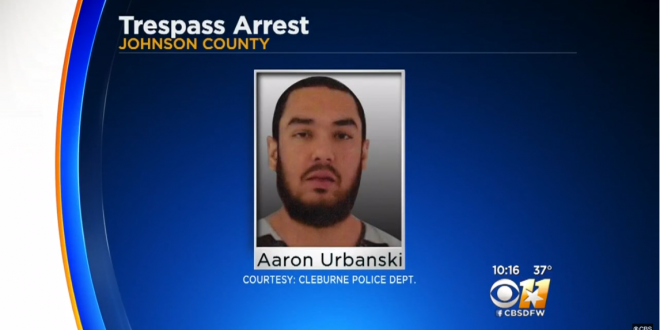 A man was arrested for trespassing at a Cleburne, Texas church on Saturday after telling children that Santa Claus is “not real,” police said. It happened at St. Mark United Methodist Church of Cleburne during a “Breakfast with Santa” event, police said.

Aaron Urbanski, 31, of Joshua, was arrested on a charge of trespassing and booked into the Johnson County Law Enforcement Center. No bond was immediately set. Urbanski was one of three men protesting outside the church, police said.

Heather Johnson, a mother of four young children, said two men holding signs confronted her on the way into the church and said, “Do you let your kids believe in a fake Santa or do they know who Jesus is?”

Urbanski’s Facebook page is filled with photos of similar demonstrations, some of which, of course, take place at LGBT pride events.

A similar incident happened this week in Tampa:

Cape Coral’s Festival of Lights was Saturday, and some people said instead of it being a lighthearted night filled with entertainment and visits with Santa Claus, some children were left in tears.

A Cape Coral mom took cell phone of a man with a giant “Trust Jesus” sign, in the middle of the excitement yelling that Santa isn’t real and parents are telling their children lies.

Cape Coral Police was at the event but said they couldn’t do anything because the man was exercising his freedom of speech. Police said it could only intervene if the man used a voice enhancer like a megaphone or created a riot, which he didn’t.

Previous Rubio Warns Trump: If You Pardon Manafort, You Will Trigger A Debate About Amending Pardoning Powers
Next Schiff: Trump May “Face The Real Prospect Of Jail Time”