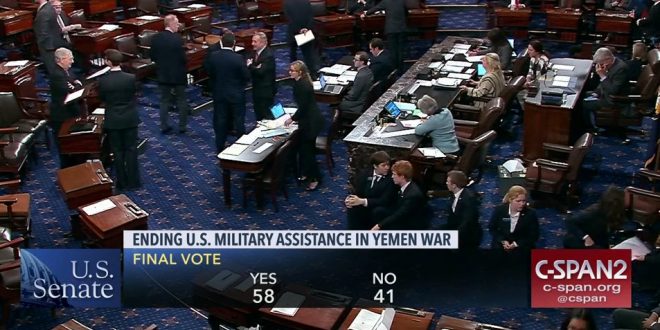 Senate Votes To End US Involvement In Yemen War

The Senate voted, 57-38, to end U.S. military involvement in Yemen as lawmakers continue to express outrage and frustration with the president’s refusal to condemn Saudi Crown Prince Mohammed bin Salman for the killing of journalist Jamal Khashoggi despite the CIA’s finding that Mohammed likely is responsible.

Thursday’s action is largely symbolic, as the resolution is dead on arrival in the House, where lawmakers blocked such a measure from being voted on this year. Trump has refused to condemn Mohammed for killing Khashoggi, a Saudi national, in the Saudi consulate in Istanbul on Oct. 2.

Once in a while, with persistent prodding and shaming, the U.S. Senate rises to the moment.

Final vote on the Lee/Sanders/Murphy resolution to pull America out of the immoral, disastrous Yemen war: 56-41.