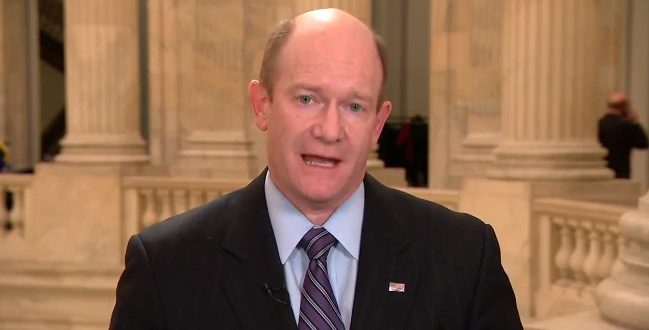 Coons took particular exception to a Trump tweet on Sunday saying it was “unthinkable & unheard of” for the FBI to raid Cohen’s office in April, when agents for the bureau seized documents from Cohen’s office and home. Coons also criticized Trump’s characterization of the raid, saying that Trump sounds “more like a mob boss” than the president.

Remember, Michael Cohen only became a “Rat” after the FBI did something which was absolutely unthinkable & unheard of until the Witch Hunt was illegally started. They BROKE INTO AN ATTORNEY’S OFFICE! Why didn’t they break into the DNC to get the Server, or Crooked’s office?

President @realdonaldtrump swore an oath to preserve, protect, and defend the Constitution of the United States–the supreme law of the land. By using the language of a mob boss and constantly eroding confidence in the rule of law, he is consistently violating that sacred oath. pic.twitter.com/FerGR6vvsG

Previous Watergate’s John Dean: Trump Is An “Incompetent Wuss” Who Like Most Bullies “Thinks Nasty Is Strong”
Next Two Former Flynn Associates Indicted For Conspiracy