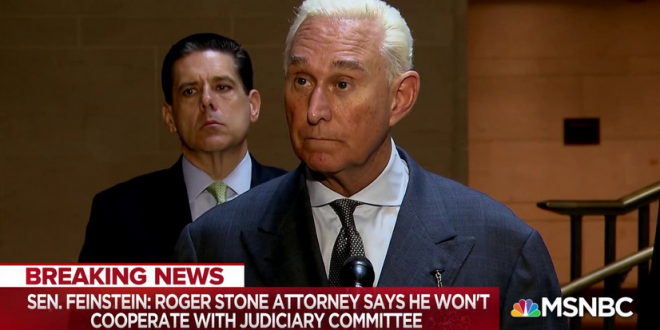 Roger Stone Invokes The Fifth In Letter To Senate

President Donald Trump’s longtime political ally Roger Stone invoked his Fifth Amendment protection as he declined to share documents and testimony with members of the Senate Judiciary Committee, according to a letter posted Tuesday by the committee’s top Democrat, Sen. Dianne Feinstein.

“Mr. Stone’s invocation of his Fifth Amendment privilege must be understood by all to be the assertion of a Constitutional right by an innocent citizen who denounces secrecy,” Stone’s attorney, Grant Smith, said in the letter, dated Dec. 3.

Stone has largely aligned his public messaging on Mueller with the president’s, frequently bashing the special counsel’s tactics. Stone’s approach earned him a supportive tweet from Trump this week, when the president praised Stone’s “guts” for refusing to testify against him.

TRUMP in September 2016: "The mob takes the Fifth. If you’re innocent, why are you taking the Fifth Amendment?" pic.twitter.com/xuta4kGVuz

Previous GOP Rep Shrugs Off Saudi Murder Of WaPo Reporter: Journalists Disappear All Around The World [VIDEO]
Next Stocks Crater After Trump’s “I Am Tariff Man” Tweet