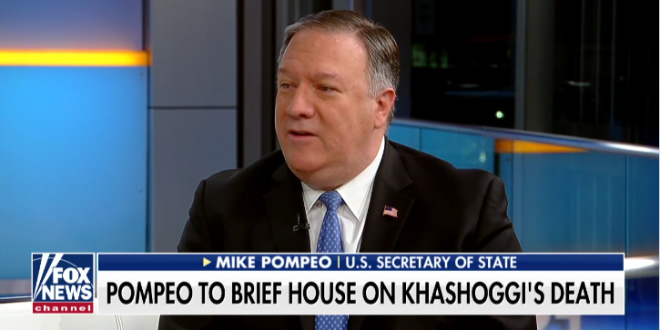 Secretary of State Mike Pompeo appeared on Fox & Friends this morning where he appeared to deny that Saudi Arabia’s crown prince ordered the murder of Jamal Khashoggi.

Brian Kilmeade noted that many members of Congress are convinced of Salman’s guilt, especially after CIA Director Gina Haspel briefed lawmakers about the evidence collected by her team. To this point, Kilmeade asked Pompeo “we know the prince knows, right?”

Pompeo declined to answer the question directly, so Kilmeade tried again with “so…when you looked him in the eye and he denied it, did you believe him?”

“The kingdom of Saudi Arabia decides who is running the country,” Pompeo dodged again. “I think this is what the president said yesterday. We are working closely with the kingdom to make sure that America is protected. That’s our interest there.”

When another Fox host brought up the damning CIA report, Pompeo replied, “Reporting that you have seen on that has been inaccurate.”

Pressed on Fox about Saudi Crown Prince’s involvement in Khashoggi murder, Pompeo delivers three separate justifications for US inaction:
1- “The KSA decides who runs the country.”
2- “The direct evidence isn’t yet available.”
3- “Iran is running rampant around the Middle East”

Previous Glorious Leader Repeats Stupid Lie About Obama
Next Frothy Mix: I Don’t Want To Be Trump’s Chief Of Staff