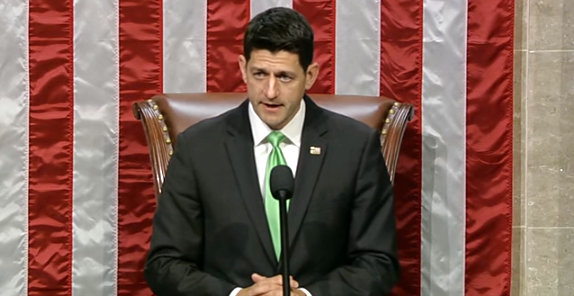 When Paul Ryan became speaker of the House in 2015, the federal budget deficit was $438 billion. He blamed the “failed policies of President Obama” for budget deficits that had exploded to $1.4 trillion in 2009, the year after the Great Recession, though shortfalls began shrinking in the following years and were continuing to fall as Ryan took the gavel.

Today, with Ryan preparing to retire from Congress, the annual federal budget deficit is again approaching $1 trillion. Over his two decades in Congress, the total national debt increased from less than $6 trillion to nearly $22 trillion. Yet the years of his speakership saw no new foreign conflict or recession that forced the government to live beyond its means.

Previous Coulter: If Trump Doesn’t Build The Wall, He Will Have Just Been A Joke President Who Scammed America
Next Freedom Caucus Revolts Over No-Wall Spending Bill