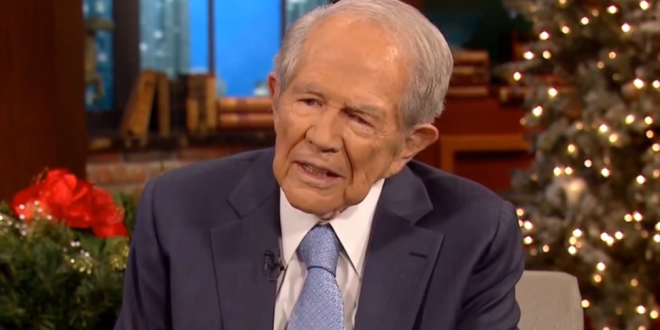 Pat Robertson: GHWB Only Launched The First Gulf War After I Told Him God Told Me It Would Be Successful

Speaking today on The 700 Club, Pat Robertson declared that George H.W. Bush only launched the first Gulf War after Robertson assured him in person that God had said it would be a success.

“He was in the Oval Office and just at that time, his representative in Geneva had been meeting with a representative of Saddam Hussein and the talks had broken down,” Robertson recalled.

“I said, ‘Mr. President, I’ve got a word from the Lord for you.’ He said, ‘What is it?’ I said, ‘There is going to be a war, it is going to be enormously successful, you’re going to be hailed as a great military leader, and your success is going to go through the roof.’”

Robertson said that he and Bush then “joined hands together” in prayer and “asked for God’s anointing and his wisdom on this man, and he went from there into the Cabinet Room and they launched the Gulf War.”