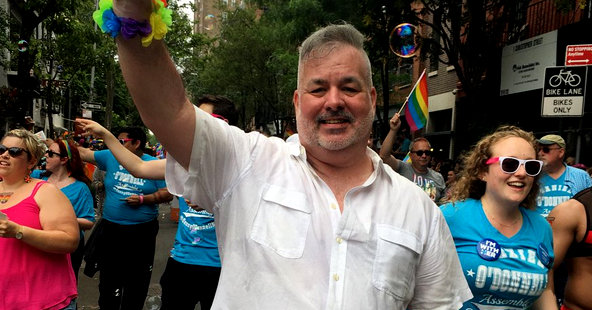 Assemblymember Danny O’Donnell, the first openly gay man elected to the New York State legislature who successfully led the fight for and passage of Marriage Equality in New York, was endorsed today in his race for New York City Public Advocate by the LGBTQ Victory Fund. Victory Fund is the nation’s largest organization dedicated to changing the face and voice of America’s politics and achieving equality for LGBTQ Americans by increasing the number of openly LGBTQ officials at all levels of government.

“If New York truly wants an advocate, and an effective advocate at that, there’s simply no one better suited for the job than Danny O’Donnell. Danny has been leading the fight for equal rights for all people for his entire career, from his historic work on Marriage Equality to his tireless efforts to reform New York’s broken corrections system. He’s tough, tenacious, and truly progressive, and the Victory Fund is proud to endorse him for Public Advocate,” said Sean Meloy, Senior Political Director at LGBTQ Victory Fund.

“I’m honored to receive this endorsement, and proud to work with the Victory Fund to continue to advance civil rights throughout our City, State and nation,” said O’Donnell. “As a gay man, I understand that discrimination of all kinds undermines us as a nation, and we need a strong Public Advocate to stand up to the evils of the Trump administration by protecting everyone’s civil rights here in New York.”

If elected, O’Donnell would be the first openly gay person elected to citywide office in New York, marking a major milestone in advancing LGBTQ representation in one of the nation’s most progressive cities.

TONIGHT: Danny O‘Donnell is hosting a campaign kick-off for NYC Public Advocate in his new campaign headquarters at 2697 Broadway with friends and supporters. Danny will be joined by the Honorable Keith Wright as the Master of Ceremonies, and his sister, actress and activist Rosie O‘Donnell as a Special Guest. Endorsements from sitting elected officials in all 5 boroughs will be announced.

DISCLOSURE: Danny and his husband are longtime personal acquaintances of mine. Danny is a longtime JMG reader.