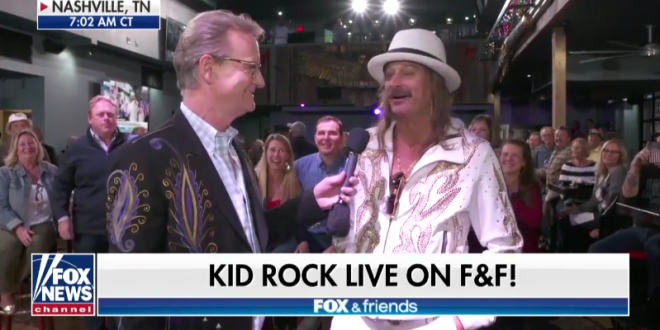 Kid Rock was fired from his role as grand marshal of the Nashville Christmas Parade Friday night, following a morning appearance on “Fox & Friends” in which he called Joy Behar a “bitch.” But associates are insisting he still plans to lead the parade, booted or not.

Bryan Lewis, the attorney for Steve Smith, Kid Rock’s business partner and “best friend,” told Variety Friday night that the controversial performer was planning on showing up and fulfilling his duty as grand marshal Saturday morning.

That’s even though parade organizers have already invited James Shaw Jr., aka “the Waffle House hero,” to be grand marshal in his stead. “My best analogy is it’ll be a standoff at high noon,” Lewis said.

Well, it’s officially the end of the line for Kid Rock in the Nashville Christmas Parade after controversy on Friday.

The star took to Instagram Saturday morning saying it looks like his parade has “officially been rained on” and that he hopes the parade is a success, but “Rock N Roll Never Forgets.”

Kid Rock’s attorney confirmed to FOX 17 News that the star will be watching the Nashville Christmas Parade from his Honky Tonk on lower Broadway, along with his granddaughter and business partner Steve Smith, who is also the owner of Tootsies Orchard Lounge.