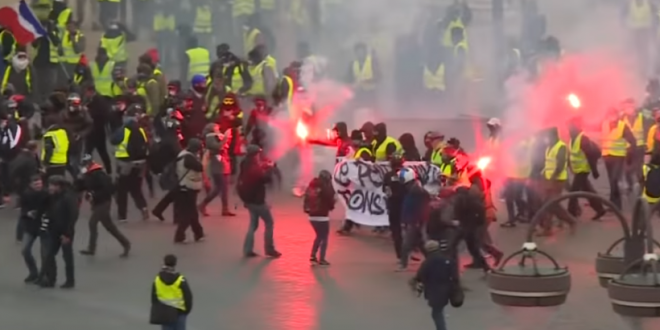 France’s most violent urban riot in more than a decade engulfed some of central Paris on Saturday as “yellow jacket” activists torched cars, smashed windows, looted stores and tagged the Arc de Triomphe with multi-colored graffiti.

Protesters angry about rising taxes and the high cost of living clashed with French riot police, who closed off some of the city’s most popular tourist areas and fired tear gas and water cannon as they tried to quell the mayhem in the streets. At least 110 people were injured.

French President Emmanuel Macron denounced the violence from the G-20 summit in Argentina, saying those who attacked police and vandalized the Arc de Triomphe will be “held responsible for their acts.” He said he will hold an emergency government meeting Sunday on the protests.

President Emmanuel Macron considered declaring a state of emergency as he met security chiefs on Sunday seeking a way out of nationwide protests after rioters turned central Paris into a battle zone and vandalized the Arc de Triomphe monument.

Riot police on Saturday were overwhelmed as protesters ran amok in Paris’ posh neighborhoods, torching dozens of cars, looting boutiques and smashing up luxury private homes and cafes in the worst disturbances the capital has seen since 1968.

The unrest poses the most formidable challenge yet to Macron’s presidency, with the escalating violence and depth of public anger against his economic reforms catching the 40-year-old leader off-guard and battling to regain control.

Previous Israeli Police Call For Charging Netanyahu With Bribery
Next Roger Stone: I Would Never Testify Against Trump And I Haven’t Discussed A Pardon With Him Either [VIDEO]