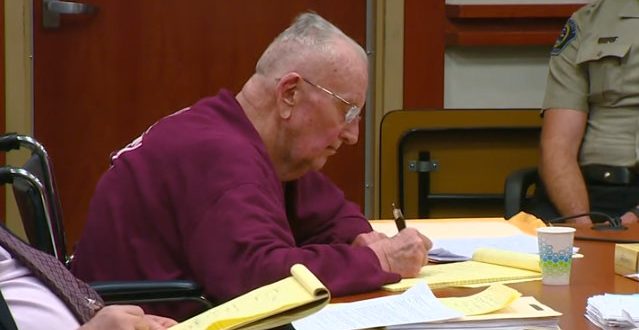 IDAHO: Pedophile Catholic Priest Gets 25 Years In Case That Prosecutors Called Among “Worst Ever Seen”

The Rev. W. Thomas Faucher, a longtime priest in the Roman Catholic Diocese of Boise who pleaded guilty to five felony crimes, has been sentenced to 25 years in prison without parole and will be required to register as a sex offender.

He apologized in the courtroom ahead of his sentencing at the Ada County Courthouse in Boise on Thursday. “I was one really sick puppy. I screwed up big time. I feel so much remorse and anger,” Faucher said at his sentencing.

Deputy Prosecutor Kassandra Slaven said investigators found more than 2,000 images and videos of child pornography in Faucher’s possession, some of which depicted “the extremely brutal rape and torture of children.”

She said the content was some of the worst material ever seen by the Internet Crimes Against Children Task Force and noted that it included “many, many infant children.” Some of the images and videos included torture of adults, as well as torture and killing of animals.

“There’s no doubt this defendant has very sadistic and deviant sexual interests,” Slaven said. She said there were “countless” chat conversations in which he talked about his desires to sexually abuse and kill children.

If you can bear it, gruesome details are here and here.