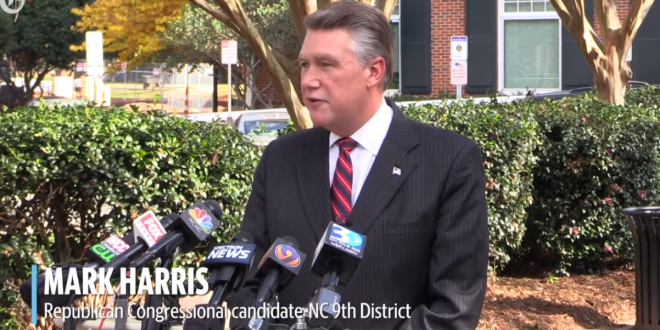 Incoming House Majority Leader Steny Hoyer said Democrats should refuse to seat a Republican next year until questions are resolved over accusations of campaign-related fraud.

Hoyer said there’s a “substantial question” surrounding the election of GOP candidate Mark Harris in North Carolina and called for a thorough investigation before Harris is sworn in.

“This is a very substantial question,” Hoyer told reporters Tuesday. “Clearly we would oppose Mr. Harris’ being seated until that is resolved.”

North Carolina has held special elections to fill vacant congressional seats when, say, a member has resigned. But, if the State Board of Elections and Ethics Enforcement calls for a new election for the 9th Congressional District, it will apparently be the first time in N.C. history that alleged fraud has caused voters to go to the polls a second time to decide the same congressional race.

Fraud has caused some rematches in local elections in the state, said Gerry Cohen, who drafted election laws during his 37 years — 1977 to 2014 — as special counsel for the N.C. General Assembly. But, he said, this would “absolutely be the first time for a congressional election.” This is a new chapter in North Carolina politics,” agreed Michael Bitzer, a political scientist from Catawba College.

A second woman Channel 9 spoke with on Tuesday said she was paid by an electioneer in Bladen County to pick up absentee ballots in the U.S. House District 9 race.

Cheryl Kinlaw said she was paid $100 by McCrae Dowless to pick up the ballots. She said she didn’t know it was illegal and needed extra money for Christmas presents.

Kinlaw said Dowless told her he “has been doing it for years.” Kinlaw said she never mailed the ballots, but instead, gave them to Dowless. She said she doesn’t know what he did with them afterward.

A man who worked as an “independent contractor” for Republican Mark Harris’ campaign in North Carolina’s 9th Congressional District is a convicted felon who faced jail time for fraud and perjury, according to court records. Over the last two decades, he has been paid by at least nine candidates, all for get-out-the-vote work, according to state records.

Leslie McCrae Dowless was convicted of felony fraud in 1992 in Iredell County, according to court records. Dowless and his wife were accused of taking out an insurance policy on a dead man and collecting nearly $165,000 from his death, according to a 1991 Fayetteville Observer article.

Like the woman I interviewed yesterday, Kinlaw never mailed the ballots. She gave them to McCrae Dowless. She doesn’t know what he did with them afterward. She says she has no doubt Dowless wanted Mark Harris and Sheriff Jim McVicker to win. pic.twitter.com/8zQeZvFo4g

"The notes left behind by Smith specifically refer to receiving payment in exchange for collecting unsealed absentee ballots"https://t.co/NHu4c07F5k pic.twitter.com/5pO5hOlbPk

Previous Christian TV CEO: Hillary Was Conceived As The Whore Of Babylon In Secret 1946 Scientology Ritual [VIDEO]
Next Judge Rules Jurors Can See Hitler Image Nazi Killer Texted To His Mother Before Deadly Drive Into Crowd