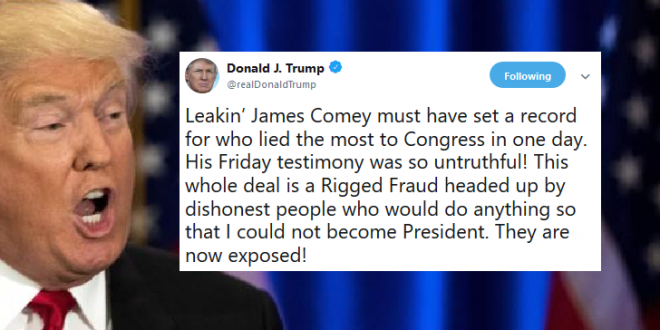 President Trump lashed out at James Comey early Sunday, accusing the former FBI director of lying during his testimony to House lawmakers about the investigation into Russian election interference.

Comey testified last week before the House Judiciary and Oversight and Government Reform committees behind closed doors. The panels later released a transcript of the roughly six-hour meeting.

The transcript revealed that Comey told lawmakers that the counterintelligence investigation into possible conspiracy between Russia and the Trump campaign began by examining four Americans, whom he did not identify, citing the potential they are part of an ongoing investigation.

Leakin’ James Comey must have set a record for who lied the most to Congress in one day. His Friday testimony was so untruthful! This whole deal is a Rigged Fraud headed up by dishonest people who would do anything so that I could not become President. They are now exposed!