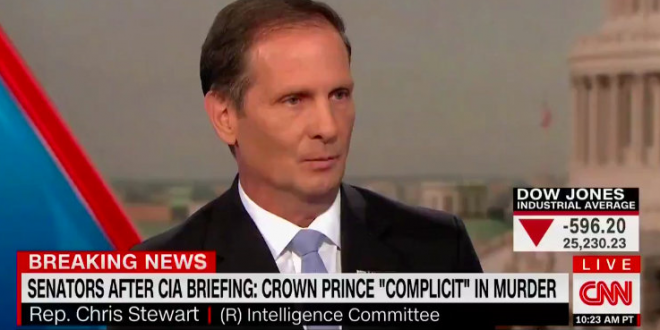 GOP Rep Shrugs Off Saudi Murder Of WaPo Reporter: Journalists Disappear All Around The World [VIDEO]

In a Tuesday appearance on CNN, House Intelligence Committee member Chris Stewart (R-Utah) backed up Trump’s previous dismissal of CIA findings, saying the information he received about Khashoggi’s death “was not definitive.”

He then questioned why people seemed so fixated on Khashoggi’s death, seeing as “journalists disappear all over the country,” as well as in Mexico, China, and Turkey. “And yet we have to have relationship with these individuals,” Stewart said.

Wow — @RepChrisStewart downplays Saudi Arabia’s responsibility for murdering the dissident journalist and Virginia resident Khashoggi: “Journalists disappear all over the country. 20 have been killed in Mexico. You don’t think it happens in Turkey and China? Of course it does.” pic.twitter.com/L5cJgYQwmK